Moore announced Monday that Fagan Harris, president and CEO of Baltimore Corps, a nonprofit employment and grant-making agency, will become his chief of staff in the State House.

Harris and Moore co-founded the organization a decade ago.

Moore traveled to Annapolis on Monday afternoon to announce his intention to bring Harris aboard, along with four other key hires for his administration:

“I could not be more excited to be here with these leaders on this historic day,” Moore said. “We’ve enlisted leaders who are not only exceedingly competent but also innovative and hard-charging.”

By tapping Harris, who has never worked in government before — but has worked closely with government, particularly in Baltimore City — Moore is hoping to signal a change in the way the state does business, advisers said. Harris has few close ties to the Annapolis political establishment.

“The governor-elect really believes that Marylanders want us to do things differently and that’s what voters wanted…so I think we’re really going to lean into that,” Harris said in an interview Sunday.

Baltimore Corps, which Harris has led since he started the organization with Moore, the nonprofit’s first board president, recruits and places people who are often overlooked in the job market, connecting them to career opportunities in public service or with nonprofit organizations or entrepreneurial ventures.

The nonprofit calls itself one of the largest recruiters of diverse, underestimated talent in and for Baltimore City, as well as the city’s largest grant-maker and lender to early-stage social entrepreneurs and small businesses. Most recently, in the wake of the COVID-19 pandemic, Baltimore Corps has focused on building the city’s public health workforce.

“Baltimore Corps has been a steadfast partner in operationalizing our shared vision for a better, more equitable, and thriving city,” Baltimore Mayor Brandon Scott (D) said earlier this year.

Harris said the organization would announce a new CEO soon.

Moore and Harris knew each other well before the organization’s founding.

Harris, 35, grew up in Bowie and in Anne Arundel County, and attended local public schools. After graduating from Stanford University, Harris became a Rhodes Scholar, attracting the attention of a previous Black Rhodes Scholar with Maryland ties — Moore, who reached out to Harris and quickly became a mentor.

When Harris was finishing his studies at Oxford and trying to figure out what to do next, “It was Wes who really played a role in me coming home,” he recalled. “I really just wanted to come home and serve but didn’t know what I should do. Wes said, ‘Come on home, man, and I’ve got you.’”

Before launching Baltimore Corps with Moore, Harris co-directed the Impact Careers Initiative at The Aspen Institute, where he led a team of researchers who studied talent pipelines in the public and social sectors. He also worked at the White House Council for Community Solutions during the Obama administration.

Harris lives in the Mt. Vernon neighborhood of Baltimore. He is married to Meryam Bouadjemi, a filmmaker who was his classmate at Glen Burnie High School.

Harris said he and Moore first began discussing what role he might play in a hypothetical Moore administration during the late summer. Moore, he said, decided that Harris would be valuable playing a similar role in state government to the mission of Baltimore Corps: To find talent and build “a world-class team” — both on the governor’s staff and in state agencies — that expanded the universe of typical political appointees and state employees.

“We’ve got to really inspire people to serve in government,” Harris said. “Let’s get people really invigorated around the work of government.”

Harris’ chief exposure to state government so far has been serving on the Blueprint for Maryland’s Future Accountability and Implementation Board.

“I’m not daunted [by the lack of experience in state government], but I am humbled — and I’m sobered by the work ahead.”

Moore’s announcement of the five top hires comes just days after he said that Lt. Gov.-elect Aruna Miller (D) would head up his expansive transition team, and that Cleo Hirsch, a former official in the Baltimore City Public Schools, would run the transition’s day-to-day operations.

With Moore due to take office on Jan. 18, the transition proceeds apace with the hiring of Harris and the four others. All the new hires are intriguing in their own ways:

In Luedtke, Moore is getting a young but highly experienced lawmaker who was just elected to his fourth term — and whose wife, Dawn Luedtke, was just elected to the Montgomery County Council. Eric Luedtke, 41, is a top lieutenant to House Speaker Adrienne Jones (D-Baltimore County) and was an early backer of Moore’s in the Democratic primary. A faculty member at the University of Maryland School of Public Policy, Luedtke will be an integral part of Moore’s legislative strategy. He has strong, obvious ties to House leadership, but is also well-regarded by many senators.

Luedtke’s looming departure means that Jones will have two top leadership jobs to fill before the General Assembly reconvenes in January: Luedtke’s majority leader slot and the House majority whip position, which had been filled by retiring Del. Talmadge Branch (D-Baltimore City).

When Luedtke resigns, his District 14 House seat will be filled by the governor — either outgoing Gov. Larry Hogan (R) or Moore, depending on the timing — after getting a recommendation from the Montgomery County Democratic Central Committee. Even before the new General Assembly convenes, unelected members will be serving in Annapolis.

Luedtke’s colleagues in District 14, which takes in a significant portion of northeastern Montgomery County, quickly issued a statement congratulating him.

“Delegate Luedtke has been a voice for expanding voter rights, job access, school funding, and protecting our parks,” Sen. Craig Zucker (D) and Dels. Anne Kaiser (D) and Pamela Queen (D) said in the statement. “Although we will miss him as a colleague in the Maryland General Assembly, he will take his expertise and passion to the Governor’s office where we know he will work to leave no one behind.”

Grady, Moore’s nominee for budget secretary, has been in her current position at Hopkins since 2020 but joined the staff a decade earlier, first as associate dean for finance and administration in the School of Nursing, then as vice president for planning and budget. She also served as deputy director of finance for the City of Baltimore for nearly five years and as Philadelphia’s assistant and then deputy budget director for almost four years. 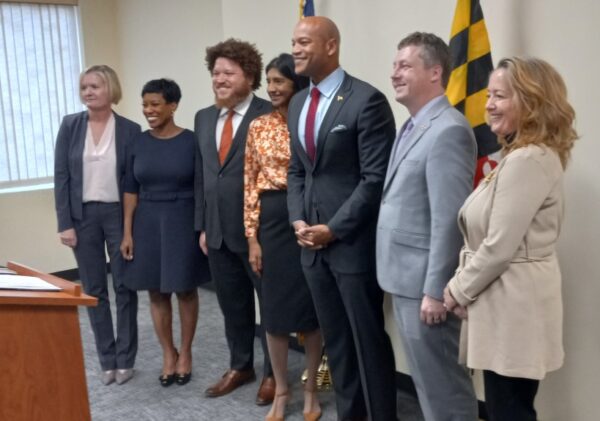 Grady is married to Matthew Gallagher, the president and CEO of the Goldseker Foundation in Baltimore who was chief of staff to former Gov. Martin O’Malley (D). Gallagher also happens to be board president of Baltimore Corps.

Edwards, Moore’s nominee to be appointments secretary, most recently was chief of staff of the governor-elect’s campaign, and is one of his closest advisers. As appointments secretary, she’ll be in charge of filling thousands of positions in the administration and on countless state boards and commissions — a powerful position that outgoing Gov. Larry Hogan (R) filled under former Gov. Bob Ehrlich (R).

Edwards and Grady will need to be confirmed by the state Senate.

LaForge, who served as counsel to the Moore campaign, has been a top Democratic campaign lawyer for the past two decades, including as counsel to the Democratic National Committee. But she also has worked in state government, during the Glendening administration. She worked for then-Secretary of State John Willis – who also brought Dawn Flythe Moore, the governor-elect’s wife, into state government. Willis was also an informal Moore campaign adviser this year.

LaForge, who lives in Chevy Chase, was a driving force behind the creation of Emerge Maryland, the organization that recruits and trains Democratic women to run for office. She’s currently the group’s vice chair.

This story has been updated to include quotes from the news conference announcing the appointments and to reflect that Tisha Edwards was chief of staff to former Baltimore Mayor Catherine Pugh (D).

This article was written by Maryland Matters, read more stories like this here.

An Update on Mayor Bowser’s Strikeforce on Black Homeownership

BALTIMORE BANNER: As Gov. Larry Hogan and Wes Moore prepare to swap places in the governor’s mansion, Baltimore officials and political analysts are gearing up for a leader they think will seek greater partnership with […]

Everybody saw it coming. And yet, the Supreme Court decision Friday to strike down Roe v. Wade, the historic 1973 decision guaranteeing abortion rights across the country, may be reordering Maryland politics just 3 1/2 […]