Maryland Matters: Work on the Purple Line ground to a halt in 2020 when the prime subcontractor on the New Carrollton-to-Bethesda transit project quit following a lengthy contract dispute with the state.

Two years later, workers are back on the job under the auspices of a newly formed conglomerate, Maryland Transit Solutions. The return to work is a significant moment for a project that transit advocates have pined for for decades.

Work on the transit route was well along when Purple Line Transit Constructors, the original prime subcontractor, quit over a disagreement with the Department of Transportation about who bore responsibility for cost overruns. Many communities were torn up, and they lingered that way over the last 24 months, making life hazardous for pedestrians and difficult for motorists.

Despite the state’s claim that construction has fully resumed, some observers said the activity level at work sites appears less than before.

“The concessionaire is ready to take on some more work, but we are not yet seeing the major capital activity that we expect when things are going full bore, and it sounds like that might be more into October,” said Greg Sanders, a top official with Purple Line NOW, an advocacy organization. 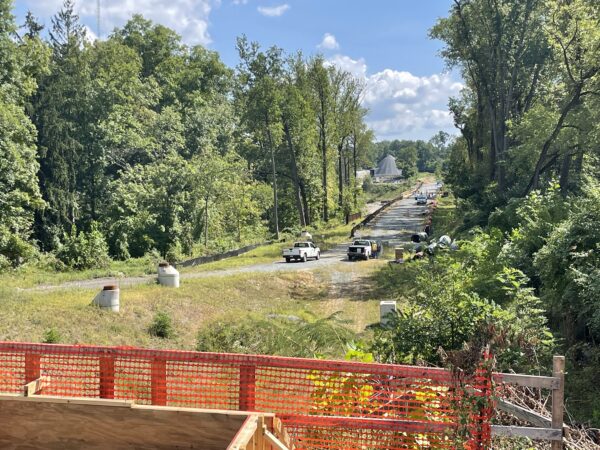 Abrams said there’s “a lot of activity” near Jones Bridge in Chevy Chase, in downtown Bethesda near the Metro station, along Campus Drive in College Park, and in New Carrollton.

Sanders’s father Harry was a leading advocate for a transit system that would enable inner-Beltway residents to travel east-west by rail without having to go through the District of Columbia. He called the resumption of work “exciting.”

“It has been a rough period,” he said. “One of the things that’s super-nerdy exciting for me is one of the few places where rail is actually coming in. That’s where it feels most real to me.”

When the original prime subcontractor quit, MDOT took over day-to-day management of the project. Sanders credited the state with keeping some elements of the project on track — primarily utility relocation and permitting — though he said most work “stalled” during the search for a replacement contractor.

Sanders also praised Maryland Transit Solutions for reaching a Project Labor Agreement late last month with the unions representing project employees. “I would rather have that in hand and know that unions are on board,” he said.

Maryland Transit Solutions is expected to bring on more than 1,200 workers, including laborers, administrative personnel and subcontractors.

The state Department of Transportation and Maryland Transit Solutions opted against a symbolic groundbreaking to mark the resumption of work, perhaps owing to the project’s rocky history. When construction began in 2017, the line was due to open this year. Because of a litany of factors, launch has been deferred until 2026 — and Gov. Larry Hogan (R), a suburban real estate broker who approved the project early in his first term, has been accused of mismanaging the project.

The Purple Line is believed to be one of the largest public-private partnership projects ever undertaken. Hogan is a “P3” advocate, saying they reduce reliance on tax dollars.

When the project was approved, the state signed a $5.6 billion agreement that included both construction and 30 years of operation. When the Board of Public Works approved the new agreement with Maryland Transit Solutions earlier this year, the price had ballooned to $9.3 billion. While design changes and a lengthy lawsuit hurt the project early on, officials stress that supply chain issues and inflation have also been factors in driving up costs.

Although there had been talk of opening one leg of the system early, in part to give Hogan a ribbon-cutting opportunity before he leaves office in January, Abrams said the line will open only when it is able to serve all 21 stations. Sanders, who receives regular briefings on the project, said a partial opening would have added expense and delayed completion of the entire line.

This article was written by Maryland Matters read more articles like this here.

Written by James Wright Jr. Washington Informer – Leaders of Black women’s groups and their supporters rallied outside of the U.S. Supreme Court building in the District on Thursday to call on the U.S. Senate to […]

Freedom. It’s so close, isn’t it? I can feel it. We shall have it. Those 14 words are portrayed in a live animation documentary about the family of Daniel and Mary Bell, enslaved in Prince […]

By Bennett Leckrone Baltimore is set to give 200 young parents a cash payment of $1,000 per month over two years as part of a guaranteed income pilot program, Mayor Brandon M. Scott (D) announced Wednesday. […]