In Maryland, victims of clergy sex abuse look to the work of Shapiro (D) with a mix of admiration and envy.

It took Shapiro’s investigators two years to investigate and put together an 884-page report that was described as a “bombshell” and led to a global push for reform and prosecution of those who committed or covered up crimes against children.

But three years after Maryland Attorney General Brian Frosh (D) announced an investigation into such abuse in Maryland, victims are still waiting for results.

And they are frustrated by what they see as foot-dragging by Frosh.

In 2019 he hired veteran prosecutor Elizabeth M. Embry to spearhead a probe of predators and church higher-ups who knew of abuse and did nothing. If Embry’s team has made progress, it has not become public.

“They’ve been telling us that there will be a report soon, but soon never comes,” said Teresa Lancaster, an Anne Arundel County resident who said she was abused by a priest. “It’s hard to sit and wait. It’s hard not to see any action.”

Lancaster is a member of Survivors Network of those Abused by Priests (SNAP), an organization of sex abuse victims and victim advocates. SNAP held a press conference outside Frosh’s office on Tuesday to complain about the slow progress of Maryland’s investigation.

David Lorenz, the group’s leader, told reporters that efforts to get information about Maryland’s clergy sex abuse probe have not yielded any information. Other members said they go so long without updates, they will send emails to investigators asking, “Are you still there?”

In a email, Frosh spokeswoman Raquel Coombs said the investigation is “ongoing.”

Frosh, 75, is set to retire in January, at the conclusion of his second term. He announced last fall that he would not seek a third.

Coombs declined to say whether Frosh expects to seek indictments or issue a report before leaving office. She also declined to describe the resources the office has deployed or whether it is receiving pro bono assistance from outside firms.

Lorenz said the difference between Maryland’s handling of the issue and Pennsylvania’s is “night and day.”

“They clearly took it as a priority, and they gave it a lot of attention,” he said. “And they put a lot of resources into it.”

Officials in Pennsylvania subpoenaed church records as part of their investigation. Lorenz said he’s unaware of any church files being seized by the Maryland A.G.’s office. 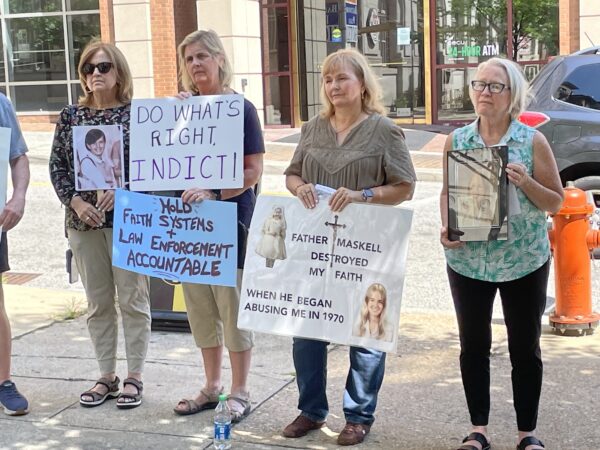 Lorenz said his group hears regularly from Maryland residents who have been abused by priests here. Maryland is a heavily Catholic state that is served by two large archdioceses, one in Baltimore (the nation’s first) and one in Washington, D.C.

Cardinal William Keeler served as Archbishop of Baltimore from 1989 to 2007 following a six-year stint as a bishop in Harrisburg, Pa., during the 1980s. According to Shapiro’s report, Keeler knew that at least two of his priests were guilty of abuse.  When Keeler moved to Baltimore, he granted one of those priests permission to follow him, knowing what he had been accused of.

Pope Francis accepted the resignation of Washington Archbishop Donald Wuerl, a former bishop in Pittsburgh, after decisions he made surfaced in the Shapiro report and drew criticism.

“We’re dragging our feet when we know that people who served in Maryland were part of the same thing that was exposed in Pennsylvania,” said Lorenz. “It’s unbelievable.”

“Two of the most powerful dioceses in the country are right here in the state of Maryland,” he added. “Are they pulling strings? I don’t know. But when you’re silent for four years, that’s where my mind goes.”

Unofficial results indicate Embry has won nomination in the Democratic primary for a seat in the House of Delegates and she is expected to leave the attorney general’s office soon. Her departure, coupled with Frosh’s, has sex abuse survivors worried that the probe will end with no report or other action. “Abusers do not stop unless they’re put in jail,” Lorenz said.

To report an act of sexual abuse by a clergy person from any denomination, email [email protected] or call the AG’s hotline, 410-576-6312.

Photo: David Lorenz, head of Survivors Network of those Abused by Priests, speaks to reporters outside the attorney general’s office in Baltimore. Photo by Bruce DePuyt.

President Joe Biden on Friday nominated federal appeals court Judge Ketanji Brown Jackson to the Supreme Court, the first Black woman selected to serve on a court that once declared her race unworthy of citizenship and endorsed American segregation. […]

Maryland’s top Democrat urged party officials to give her state a leading role in the selection of the next president, telling a Democratic National Committee gathering in Washington, D.C., on Thursday that if it’s diversity […]

Written By Michael Kunzelman The son of a Texas man charged with storming the U.S. Capitol with a holstered gun testified Thursday that he secretly recorded his father proudly describing his role in the riot […]