The former UConn guard is expected to undergo knee surgery, and it is unknown when she will be able to return. As of now, the Mystics are thinking Williams will miss the majority if not the entirety of the 2022 season.

“We are heartbroken for Christyn and will miss her greatly. She was off to a terrific start in training camp, and I know she will work diligently to make a comeback next season,” general manager and head coach Mike Thibault said. “She will have our full support and all of our resources during her rehab. She is part of the Mystics family.”

While at UConn, Williams helped the Huskies reach their 14th consecutive Final Four this year, along with making the national title game. The Huskies ended up losing 64-49 to South Carolina in the championship.

Williams averaged 14.2 points per game in her fourth and final collegiate season, leading the team in scoring during UConn star Paige Bueckers’s absence.

Bueckers tweeted about Williams’s injury following the news on Wednesday. 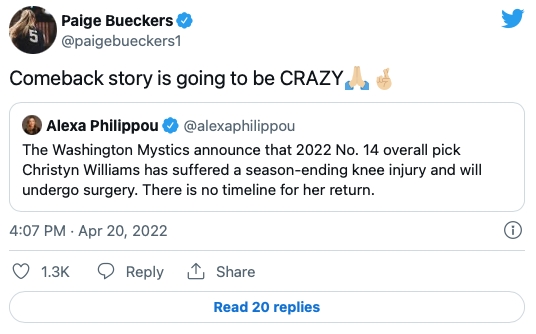 The Associated Press A federal judge on Wednesday acquitted a New Mexico man of misdemeanor charges that he illegally entered the U.S. Capitol and engaged in disorderly conduct after he walked into the building during […]

By J.J. Regan A 4-2 loss by the New York Islanders on Sunday made official something that has already been assumed for several months. With the loss, the Islanders are officially eliminated from the playoffs […]

wtop: D.C.’s attorney general on Thursday announced that he has filed a consumer protection lawsuit against the Washington Commanders, owner Dan Snyder, the NFL and Commissioner Roger Goodell, saying they had “repeatedly lied to and […]